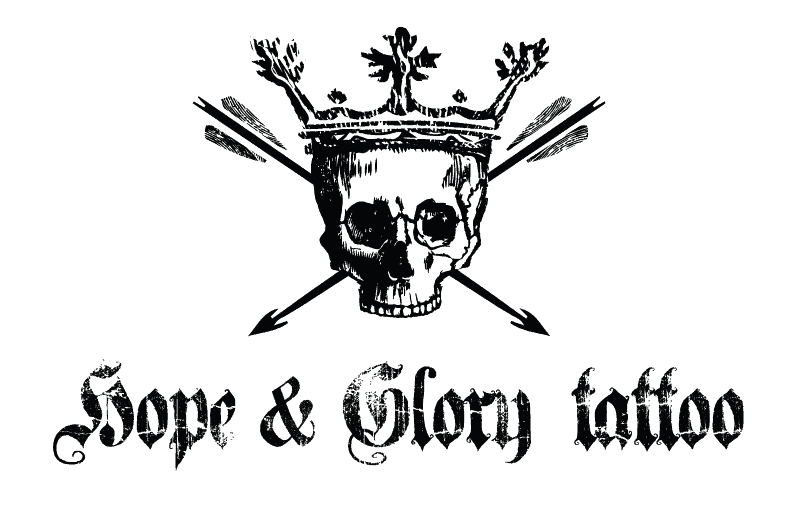 The crown settled gloriously upon the skull head is a portrayal of the crowning glory within this logo.  The precision in the drafting of this image, to announce the vigour of it, is yet another manifestation of the artful gift of the designer.  The black typeface employed in ‘hope and glory tattoo’ (as well as the utilisation of black in the illustration itself) intends a loud shout of drama to this design and this (incorporated by the white, sanitary background) bestows upon it a forcible sense of the gothic.

‘Shrine of a King, Cradle of the Law’ (the motto of Bury St Edmunds).

This design took inspiration from the legendary folklore of St Edmund the Martyr, King of East Anglia, who was as myth would have it, shot dead by arrows.  He was then decapitated by the Great Heathen Army (pagan Norse and Viking invaders) in the year 869, for refusing to yield to their request to forsake his Christian beliefs and their offer to share the rule of East Anglia.

St Edmund’s legacy was so powerful that he went on to influence many generations of Kings, and this could be seen in the sublime abbey and its great wealth, built by King Canute in 1020.

This is as well as momentous events like the signing of the Magna Carta, a decisive moment in Bury’s history (as well as in Britain’s), where the Baron’s of East Anglia proposed to take back control and law via the Charter of Liberties, from the domineering King John.

King Edmund was also England’s original patron saint.  This is before he was displaced by King Richard I, in favour of St George after visiting his tomb, before heading to battle in the time of the Third Crusade.

As recently as 2006 and 2013 there have been campaigns by local radio, politicians and local leading figures to bring back St Edmund the Martyr as the patron saint of England.  An outcome which may yet come to pass.